The spotlight is on a tribute to Nancy Wilson with Lavenia Nesmith at Westminster Presbyterian Church tonight, Friday Aug. 28, and bass man Cheyney Thomas is at Twins Jazz to help highlight the final weekend of August jazz, with Tomeka Reid at Bohemian Caverns and Pete Muldoon at the DC Jazz Jam on tap Sunday.
Nesmith is to perform with Wayne Wilentz, piano, Paul Carr, sax, James King, bass and Harold Summey, drums at Westminster. Tomorrow at Westminster the “Thinking About Jazz” program features retired Howard University professor Dr. Donald Roe talking about Nancy Wilson life and career as one of our greatest vocalist. Thomas is to perform at Twins tonight and tomorrow night. Muldoon, still garnering acclaim for his CD, “The Score,” headlines the DC Jazz Jam from 6 to 9 pm Sunday at The Brixton on U Street.
Tomeka Reid is featured at the Transparent Productions 2015-16 season opening show Sunday night at Bohemian Caverns. Says Bobby Hill of Transparent Productions, “… Reid is a Washington, DC born and raised, Chicago-based cellist, composer and educator. [She] has been described as “a remarkably versatile player,” equally adept in classical and jazz contexts and is often found in experimental and improvisatory settings, composing for a wide range of instrumentation, from big band to chamber ensemble [Reid] is an integral part of vocalist Dee Alexander’s Evolution Ensemble, flautist Nicole Mitchell’s Black Earth Ensemble/Strings, drummer Mike Reed’s Loose Assembly, as well as the AACM’s Great Black Music Ensemble, and also co-leads the internationally recognized string trio, Hear in Now.” At the Caverns Reid is to play with guitarist Mary Halvorson, drummer Tomas Fujiwara and bassist Jason Roebke.
Coming up in the Transparent Productions series in September are: Bill Cole and his New Untempered Ensemble Sept. 13, Evan Parker & Ned Rothenberg Dup Sept. 26 at Union Arts and The Thing Sept. 27 at the Caverns. Shows later this fall include Matt Lucian & Matt Maneri Oct. 11; Stephan Crump and Mary Halvorson Nov. 8; The Mark Taylor Group Nov. 29 and Grass Roots Dec. 5. 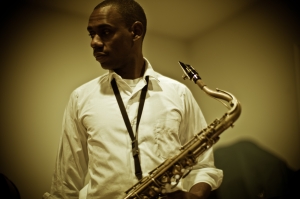 Saxophonist Brian Settles is the featured

Award-winning saxophonist, composer and educator Carl Grubbs performs with his ensemble at his Annual John Coltrane Celebration Concert at 5 p.m. Sept. 19 at St. Paul’s Schools in Brooklandville, outside of Baltimore. 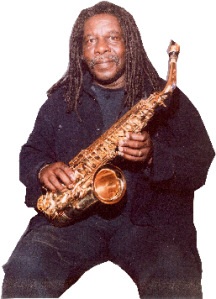 Sept. 19 at St. Paul’s Schools.
The show by Contemporary Arts Inc. and St. Paul’s Schools is in the Ward Center for the Arts, and features The St. Paul’s School Jazz Band, under the direction of jazz studies director Grubbs, and the Carl Grubbs Ensemble, with Eric Byrd, keyboards, Blake Meister, bass and John Lamkin III, drums. Tickets can be purchased online at
http://www.instantseats.com/events/contemporaryarts; call 410-944-2909 or 410-821-3047 for more information.

Cuneiform Records in Silver Spring has announced the creation of a new, sister company, called The Music Outpost, devoted to licensing cutting-edge music to various media including film/movies, dance, theatre, advertising, fashion, technology, and more. The new company launched Aug. 16 with the website http://www.themusicoutpost.com goes live. Cuneiform says numerous licensing companies already exist, “but all focus on mainstream music; licensing avant-garde music is not a priority for them.”
In contrast, The Music Outpost – “licensing music on the Sonic Frontier” – focuses on ‘outside’ music and aims to ultimately be THE go-to place for creative media professionals to find music as adventurous as their projects. Cuneiform says it will have a “continually-expanding archive of music-available-for-licensing” that will not only feature music released by Cuneiform, but also music by other experimental, boundary-defying artists.
A selection from The Music Outpost’s music archive is currently displayed on its website.

Charlie Haden’s legacy as a bass man of virtuosity, known for excelling at traditional, bebop, contemporary and avant garde, and treats from that legacy are still coming for delighted listeners despite his passing last year. Witness the recent recording “Charlie Haden, Gonzalo Rubalcaba – Tokyo Adagio.” From the publicity material: “Tokyo, March 16-19, 2005: an audience in evening clothes, ordering drinks in Japanese whispers and inadvertently clinking their silverware, listened raptly as [pianist] Gonzalo Rubalcaba and Charlie Haden connected with an almost Zen sense of stillness in a nocturnal musicspace. It’s the paradox of recording: the moment is gone, but the moment is forever, encapsulating who the two men were when they played together.”

That empathy between two sterling musicians can be heard vividly on “When Will The Blues Leave,” a tune Haden played on the Ornette Coleman 1958 release “Something Else.” With the Cuban keyboard master Rubalcaba Haden is at his walking blues best, with the pianist comping with subtle but distinct lyrical melodicism, the two players then complimenting each other’s flights through the lilting blues, almost as one, building tension, easing it, building it again.
“Sandino,” a Haden original, features the players jamming effortlessly and elegantly, Rubalcaba an efficient notemaker, with fleeting rhythms echoing through Haden’s supple bass notes. Other moments of stellar duo music-making can be heard on “Transparence.”
See http://www.crossovermeida.com for more information.

An acclaimed classical pianist, Lara Downes has nonetheless been a jazz fan since childhood thanks to her father’s jazz albums, in particular those of Billie Holiday. When Downes was eight years old, “she wrote in her diary that her favorite song was Billie Holiday’s I Cover the Waterfront. Ever since, says Downes, she has been enthralled with the “distinctive qualities of mood and phrasing, line and color” heard in Holiday’s singing.
Downes says in her publicity material, “As a musician, I learned from Billie Holiday to make something completely personal when you make music … something that is completely your own – maybe something unexpected, something indefinable, perhaps complicated, but beautiful.” 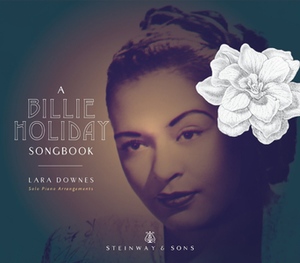 Downes, who has appeared on the world’s “greatest” concert stages, from Queen Elizabeth Hall London and the Vienna Konzerthaus to Carnegie Hall, the Kennedy Center and Lincoln Center, took a departure from the rigid world of classical structure to make a recording honoring holiday as her influence with “A Billy Holiday Songbook” on the Steinway & Sons label.
The result is a pleasantly lyrical album, featuring Downes’ elegant touch on tunes associated with Holiday. In most of the tracks Downes succeeds in capturing the drama, if not the singularity of emotional range of the Holiday performances we have come to love.
One certain highlight is the Ralph Rainger/Dorothy Parker tune “I Wished On The Moon.” Here Downes seems to capture the longing and melancholy of a Holiday delivery, as well as the lilting, loving pacing and phrasing she was known for. Another highlight is “I’ll Be Around,” with Downes exhibiting “the complicated but beautiful” quality she says she admired about Holiday.
Downes does a decent job on the other familiar Holiday tunes, such as “What a Little Moonlight Can Do,” “Good Morning Heartache,” and “I Cover the Waterfront,” and in sum has made a worthy first try at tackling a jazz recording.
See http://www.laradownes.com for more information.

“We’re inventing music in real time; listening and building one another’s ideas; tuning into what the original compowers had in mind even as we’re treating their songs as platforms for improvisation.”
That’s Eli Newberger, accomplished physician and tuba virtuoso, on his “Eli & The Hot Six Live” recording of contemporary classic jazz, released a few months ago, from live performances at the Sherborn Inn in Sherborn, Mass., in 2013 and 2014.
In the New Orleans tradition, as well displayed on “Tiger Rag,” of snappy, crisply played jazz, Newberger is ably assisted by Bob Winter of the Boston Pops on piano, Herb Gardner, trombone, Ted Casher, clarinet, saxophones and vocals, Bo Winiker, trumpet, Jimmy Mazzy, banjo and vocals, Jeff Guthery, drums, Rebecca Sullivan, vocals and special guest Randy Reinhart, cornet. 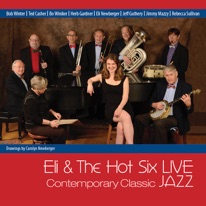 Owen McNally of WNPR in New England put Newberger’s contributions to the music this way: Going far above and beyond the Hippocratic oath to do no harm, Newberger [a pediatrician and Juilliard trained tuba and keyboard player] does great good with his agile tuba, which functions as a rock-steady, double bass-like timekeeper, as well as with his infrequent but fluent, succinct solo lines that are never less than seamless and surgically correct.”

Winter’s sprightly piano work is a highlight throughout, and noteworthy tunes include “Perdido,” which shows off Sullivan’s breezy-sweet melodies and scatting on vocals, “Body and Soul” with Casher’s solid saxophone lines winding above Winter’s lyrical piano; and “I Can’t Give You anything but Love,” Sullivan again stepping to the fore with impishly wry delivery on vocals, as she also does on “Them There Eyes” and “Just Squeeze Me.”
See http://www.sueauclairpromostions.com for more information.

Debbie Hodnett and Nomadic Jazz welcomes The Bullettes and Friends on Oct. 10 at the Durant Arts Center in Alexandria, Va. “Come witness Washington, D.C.’s premiere all-female jazz ensemble, for a night of new and powerful music,” says the Nomadic Jazz information.   ‘This is a CD release event and will feature large and small ensemble works written or arranged by members of the Bullettes,” led by trombonist Shannon Gunn. See http://www.nomadicjazz.com for complete information.

Steve Monroe, a freelance writer based in Washington, D.C., can be reached at steve@jazzavenues.com